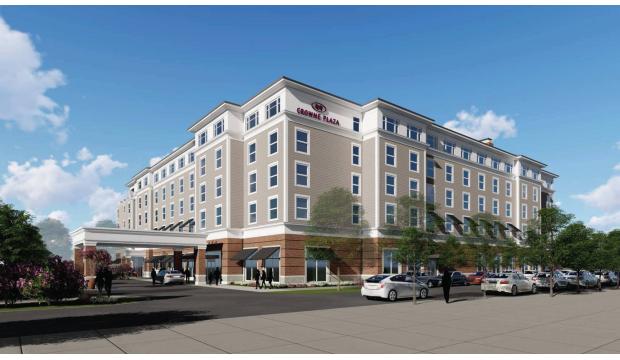 Posted at 09:16h in News by Augusta Tomorrow

The approval was conditional because the developer, Greenstone Properties, has yet to submit plans for lighting and landscaping.

Interim Planning Director Charles Martin said the “much-anticipated” hotel would be five stories, with 180 rooms, a rooftop bar, meeting spaces, and restaurants inside and outdoors.

Commission Chairman Chip Burnett said officials had said earlier that the hotel would resemble the famed Hampton Terrace, North Augusta’s jewel until it burned 100 years ago. The renderings didn’t look much like it to him, he said.

Harvey Rudy, Green­stone’s senior vice president for development, said designers started with that idea, but dropped dormers and cupolas as they worked through the process because they gave the structure a “dated” look.

“It’s not meant to be a replica of the Hampton Terrace,” he said. “It’s a modern version of that.”

Turner Simpkins, of the Hammond’s Ferry Design and Review Committee, which approved the design, agreed with Rudy. Pointing to a side elevation drawing, he said various design elements made it look like Hampton Terrace, just without the dormers and cupolas.

Rudy said Greenstone hoped to start construction in the fall and that the hotel was expected to open in December 2018.

The vote to OK the plan was 5-0, with Commissioner JoAn McKie absent.

The panel also approved the “live above” retail development that will face the hotel from across Railroad Avenue and back up to Brick Pond Park, with a 25-foot buffer.

The first floor of the long, narrow building will be for retail, with a series of 1,000-1,110-square-foot spaces. Floors two through four would be condominiums, probably 12 per floor, ranging in size from 1,000-1,400 square feet.

The city’s Owner’s Representative for the Riverside Village project, James Dean, said a two-bedroom condo would be typical. A general contractor would build the shell and a local builder would finish it out, with some input from buyers about floor plan, finishes and other details.

He said he was not ready to talk about prices yet.

Construction is expected to start in September and be done by mid-2018, he said.

The commission voted 5-0 for approval.

Planners also approved unanimously a Knox Avenue project that would house an IHOP restaurant next to an Aspen Dental Clinic in River Commons, between Arby’s and Starbucks.

A representative of owner/applicant Hotcakes RC Ventures, David Shanahan, asked planners for five waivers that mostly involved difficulties with the site, which is on a steep hill with a 23-foot grade.

Shanahan said this was the last parcel in the planned development and was “challenging from a topographical standpoint.” Therefore, some leeway was needed on building an access road and pedestrian access to adjoining parcels. The access road also would take away about a third of the restaurant’s parking, and that would be a deal-breaker for IHOP, he said.

He also asked to add a second row of parking to bring the number of spaces up to about 72.

After some discussion, commissioners agreed to the changes and approved the application.