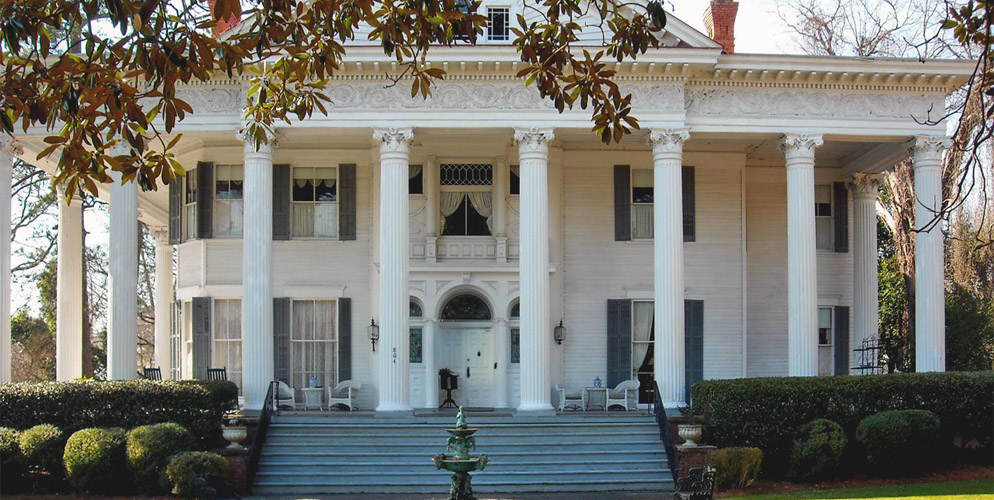 Posted at 14:23h in News, Uncategorized by Augusta Tomorrow

There are few things more iconic in North Augusta than Lookaway Hall and Rosemary Inn.

James U. Jackson, North Augusta’s founder, cut a deck of cards with his brother, Walter, manager of the North Augusta Land Company. Walter ended up winning and picked the lot that would become Lookaway as his destination. Not to be outdone, James did his best to one-up his brother by building a house that is 50 percent bigger.

The Jackson family fortune was heavily invested in the Hampton Terrace Hotel, and when the hotel burned to the ground in 1916, so did much of the finances to operate the two homes. Through the years, the homes were used as classrooms for art and music lessons and then became private homes before they were eventually abandoned.

It wasn’t until Kelly and Diana Combs took on the unenviable task of restoring the houses to their former glory in 2009 that the two became what they are today – an award-winning bed and breakfast and an award-winning hotel.

Milledge Murray, president of the Heritage Council of North Augusta, said to understand the homes, one would need to get in the mindset of living in Augusta in the 19th century.

“Every day you’re on Broad Street, which was the main industry,” he said. “You looked across the river, and you saw this big hill. It was probably a magnificent sight. When the trolley system was set up in Augusta, that was a very important means of moving people around and in the main residential areas. Augusta flooded a lot, and you didn’t have a levee. James U. Jackson was in the business for raising capital, and built up connections in New York. We have comfortable winter times down here; and when they were able to acquire 5,600 acres of land with the North Augusta Land Company, in 1890 or 1891, then they built the bridge that became Augusta’s new fancy neighborhood.

“It’s the fancy one because they were able to develop it. They had the plans of developing the finest hotel in the world, but that didn’t take place until 1903. The legend has it that you had these two prime lots. At the top of the hill they knew they were putting the hotel, and they had developed a golf course. You would have one in the center and one to the left.”

After Walter picked the Lookaway lot, he built the home in 1895. Rosemary wasn’t completed until 1902.

“I think they called it Lookaway Hall because it had this beautiful view right down the middle of the street over to Georgia,” Murray said. “You didn’t have the trees and buildings, you just had the golf course around the land. … James U. Jackson died in 1925, and his daughter was a lady by the name of Edith. She married James Bishop Alexander, and she became Edith Jackson Alexander. She wasn’t a teacher, but an artist.”

Due to the Hampton Terrace burning to the ground, much of the funding the Jackson family had relied upon to keep up the houses went with it.

Edith lived in Rosemary Hall after her father’s passing, and there she taught art classes, both on the canvas and through music. She lived there with her family until the 1980s. Residents included Daisy King Jackson and her family, as well as John Williams Jackson.

“To think that after the fire, (Rosemary) just went downhill,” Diana Combs said. “There probably wasn’t much of a staff left after that. The pictures I’ve seen show the house without paint on it, without shutters or even with the shutters entirely closed. People talked about it like it was the old, brown house because it didn’t have any paint. Daisy didn’t stay here the rest of her life, but Edith did.”

“Dr. Mealing lived there for many years, and he was real famous for his hobby, which was camellias,” Murray said. “He also produced orchids. When Queen Elizabeth decided she wanted a specific type of orchid that smelled a specific way, he provided the wedding orchids for her. It’s pretty cool to think of North Augusta being a part of the royal wedding.”

Both houses eventually fell into decline and became overrun with pests and overgrowth. A close friend to Kelly and Diana Combs convinced the couple to make a trip from California to visit the two houses.

Kelly attended the practice rounds at The Masters in 2008, and had no idea what was across the river. He convinced his wife to come and visit their friends, Bill and Debbie Turner. Both can recall their first visit, which was at Lookaway.

“They had been locked up, and they were so flea infested, that when we walked in – this is not an over exaggeration – I had some white capri pants and tennis shoes – we were jumped on by hundreds,” Diana said.

Kelly followed that up by saying they, along with the banker, had to quickly get outside. The houses had to be sprayed so they could even walk in and tour them.

“I thought it was very quiet in Lookaway,” Kelly said. “It felt like there wasn’t any life in there. It didn’t feel like a home or anything. Even though cars were zooming by on Georgia Avenue, it was very quiet in there. A lot of the rooms hadn’t been opened, and there was mold everywhere with leaks. I remember looking at all of the rooms and thinking ‘Oh my gosh, you have got to be kidding me.’”

Walking across the street and looking at Rosemary, Diana said she had a different feeling.

“I felt like this house was crying for someone to take care of it,” she said. “(Rosemary) was just so stuffed with junk, and the drapes were dirty, and I can’t even begin to tell you what else. We walked the whole house, and we came downstairs and we were taken by all of the magnificent woodwork.”

The Combses said that the houses had previously gone up for a public auction before their arrival.

No one bid on them, and though their interest was piqued by Rosemary, they weren’t as interested in Lookaway. However, the houses ended up being a package deal, and a quick decision was needed.

“The conditions were right for what I was doing,” Kelly said. “Our kids were in college or out of the house. Here, I could not get financing, so that was a major contingency. We had to get financing from some bank, so we took the stance that if it was meant to be, we would get financing. The final thing was that the houses needed to pass inspection. If the inspection proved this was going to be too costly to repair, that would prevent us from buying it.

“… The inspection came back, and it turned out that these were really solid houses. They had a lot of damage, but there was nothing structurally wrong that would lead to them falling apart. These are built like tanks. Georgia Bank and Trust really wanted to unload these, so they worked with us.”

“It’s really complex, but it’s really simple: God guides,” Diana said as to how they ended up with the two homes, with Kelly also echoing that. “If you start to look at every single detail, God really had it all knit together. It was all going to flow, and at the time, we just saw strings everywhere. To know he came through, and it was all knit together; God shuts doors and opens windows. For us, when I look back, I see how much we have been able to accomplished in these first five years. There isn’t one inch of these houses that hasn’t been rebuilt. We have done the interiors completely in both properties.

“It’s a rebirth of the houses. We’ve put things together to make them look right. We’ve been able to utilize a lot of things that were our own.”