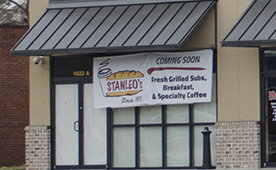 Posted at 10:18h in News, Uncategorized by Augusta Tomorrow

Augusta residents will soon get to experience a treat that has been popular in Huntsville, Ala., for the last 44 years.

Stanleo’s subs will be opening an Augusta location by mid-February of this year at the corner of Walton Way and 11th Street.

When Whitehead, a Lake Oconee resident, was looking at possible expansion locations in Georgia, he settled on Augusta due to its business-friendly climate.

“I am excited about Augusta,” Whitehead said. “There is a lot of growth going on right now. It seems like a great place to open a business.”

However, Whitehead will also be making a few changes to the original restaurant’s name and servings.

The original Huntsville location, Stanlieo’s, was opened in 1971 by Ward’s father, Glenn Watson. Watson felt that the extra “i” gave the sub shop a more Italian feel. But it was easy to miss that small letter.

“When people here spell the restaurant’s name, a lot of people tend to drop the ‘i’, so we gave Jeff permission to remove the ‘i’ for the Augusta location,” Ward said.

“The drive-thru will also be offering a few of our lunch sandwiches that are quicker to make, but not the full-blown menu,” Whitehead said.

Stanleo’s is one of two new restaurants locating on that corner. Diablo’s Southwest Grill is next door in the same building.