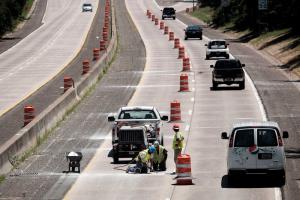 Posted at 11:34h in News, Uncategorized by Augusta Tomorrow

Travel almost anywhere in the area and you’re likely to ride through an abundance of orange traffic cones and barrels.

Major construction projects continue on multiple major roadways in Rich­mond and Columbia counties. Some still have years to go before completion. The River Watch Parkway project is likely the closest to completion. Crews have been working on the road since last year but should be finished in July.

In addition to larger projects aimed at increasing the roadway, there are multiple smaller projects that address repaving or other smaller improvements.

The project runs from River Shoals Parkway to Jones Street and includes construction of a concrete barrier wall in place of the former guardrail and the addition of median lighting. Guardrail will also be added to the outside shoulders.

The project will include four lanes with bike lanes and 20-foot raised median.

The widening of Old Petersburg Road will start about 1,400 feet west of the Baston Road intersection and extend to Old Evans Road.

The project then follows Old Evans Road along the existing alignment to Columbia Industrial Boulevard and then extends to tie into Washington Road at its intersection with Towne Center Drive.

It includes widening to four lanes, a raised concrete center median and 10-foot shoulders, and the construction of two bridges.

This project runs from Georgia Highway 88 to Willis Foreman Road and includes widening to four travel lanes as well as bike lanes and sidewalks on both sides of the roadway.

Bridges over the railroad will be replaced with four lanes separated by a raised median.

This project runs from Willis Foreman Road to Tobacco Road and includes widening to four lanes which will be separated by a raised median. Multi-use trails will be added to both sides of the road. It also includes construction of a bridge at Spirit Creek.

The project runs from Wrightsboro Road to Gordon Highway. About one mile of roadway from Newmantown Road to Bryan Circle will be widened to include a center turn lane or median while Katherine and School streets will be realigned and include a new traffic signal.

Construction will include pavement replacement, resurfacing and rehabilitation to the structure. There will be additional improvements to the lights, drainage, landscaping and other areas.