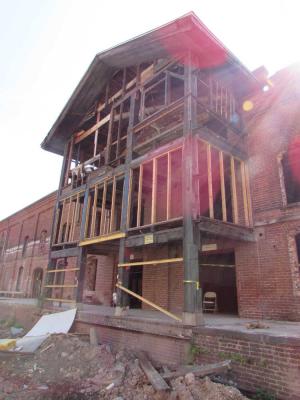 Posted at 08:23h in News, Uncategorized by Augusta Tomorrow

It isn’t the metro area’s largest construction project – it may not even be in the top five.

But the extensive renovation of the old cotton storage building at the historic Sibley Mill complex is arguably the most interesting.

In about four months, workers will have converted the 19th century warehouse into class A office space for Augusta-based IT firm EDTS and classrooms for UMBC Training Centers, a Maryland-based cybersecurity training firm.

The work is just the first phase of a local investment group’s long-term plan to turn the former textile mill into a high-tech mixed-use complex called Augusta Cyberworks, which aims to be a magnet for a local cyber industry being driven by the relocation of U.S. Army Cyber Command from Fort Meade, Md., to Fort Gordon.

Though EDTS and Columbia, Md.-based UMBC are expected to move into the 32,500-square-foot facility as early as January, transformation of the entire 20-acre site into a tech mecca is likely a few years – and millions of dollars – down the road.

For now, the priorities are simple: removing lead paint and asbestos, installing modern utilities and busting out bricked-up windows to let sunshine in for the first time in decades.

“It was like a dungeon in here,” Cape Augusta CEO James Ainslie said while giving a tour of the three-story building this week. “None of this was designed for human occupation.”

Ainslie and his business partner Wayne Millar – both South African-born businessmen – acquired the mill earlier this year through a long-term lease agreement with the Augusta Canal Authority.

The authority had been searching for a partner to redevelop the canal-front property since acquiring it in 2010 from Alabama-based Avondale Mills, which shuttered its denim operations there in 2006.

The cotton building is just a small part of the massive 500,000-square-foot mill property that Ainslie and Millar hope to redevelop in stages with help from outside investors and various local, state and federal historic preservation tax credits and enterprise zone incentives.

Cape Augusta’s plans call for a 10-megawatt data center – also known as “server farms” – whose cloud-based storage capacity would be available to not only Augusta Cyberworks tenants, but other area institutions, as well. There are no large-scale data centers in Augusta, Millar said.

“Where does Augusta send all of its data right now? Out of town,” he said.

The data center would be housed in the mill’s former boiler room, where the roof will be heightened by 40-feet to accommodate all the electronic gear, as well as heat exchangers to keep them cool. The most novel aspect of the center is that it would be powered and cooled by the waters of the Augusta Canal, which flow through the mill’s three built-in hydroelectric turbines at a rate of 600 million gallons a day.

Cape Augusta’s joint-venture deal with UMBC, a subsidiary of the University of Maryland Baltimore County, was announced earlier this week. Cape Augusta already leases the school a small space in Evans to train about a dozen information security professionals for 9- to 12-month certificate programs, but the finished cotton building will expand that capacity to about 200.

Ainslie said the program complements, rather than competes, with the cyber education efforts underway at local institutions such as Augusta University, Augusta Technical College, Georgia Military College and University of Phoenix.

The cybersecurity market is expected to grow from $75 billion in 2015 to $170 billion by 2020, according to research advisory firm Gartner. A 2015 analysis of Bureau of Labor Statistics figures showed more than 209,000 cybersecurity jobs in the U.S. are unfilled.

“This is a major growth sector, and we need to capture that in Augusta,” Ainslie said. “(The training) needs to be scaled up; not everyone can wait for four-year degree programs.”

He pointed out that San Antonio, Texas – a city that’s home to the Air Force’s cybersecurity operations and considers itself the No. 2 cybersecurity market outside of metro D.C. – is three times Augusta’s size but has nearly eight times its student population.

With U.S. Army Cyber Command moving to Fort Gordon, Cape Augusta believes the Sibley Mill complex and the larger, adjacent King Mill – of which it has an option to acquire – could recreate in Augusta a scaled down version of Maryland’s National Bus­iness Park, a city-sized office complex in Baltimore near Fort Meade and National Security Agency headquarters.

“We have to look at Baltimore if we want to be serious,” Ainslie said. “It’s the 800-pound gorilla.”