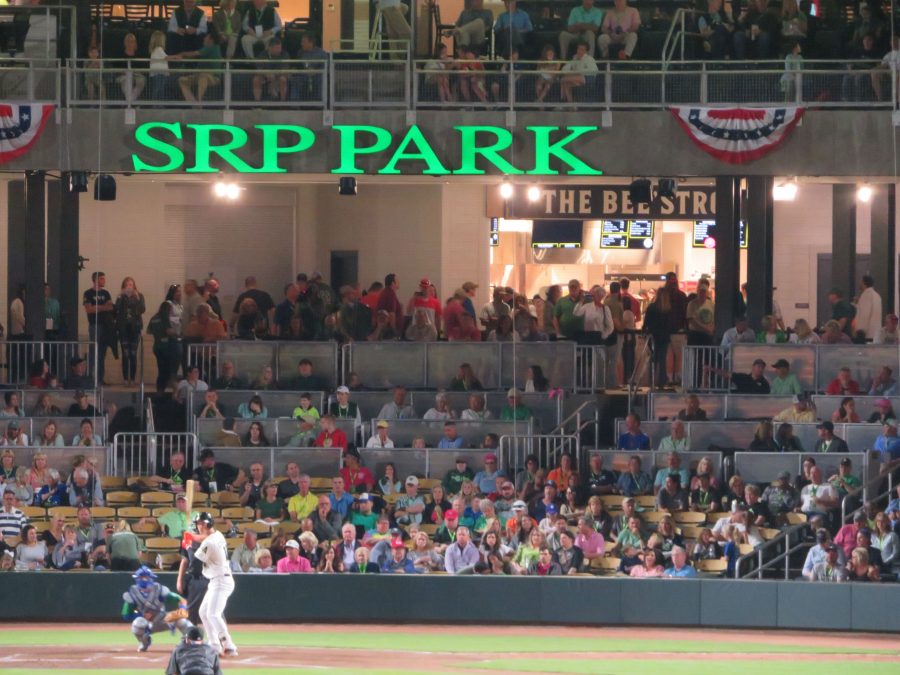 Posted at 10:15h in News by Augusta Tomorrow

Some said it would never happen, and some vowed to see that it didn’t.

But after more than five years of debate, court delays, legal fees, public and secret meetings – some would add blood, sweat and tears – it’s finally here.

The school band will play the national anthem, and its chorus will sing the alma mater. There will be a ribbon-cutting at the park’s entrance about 5:45 p.m., and a ceremonial first pitch to start the action. People and organizations that had a direct hand in stadium construction will be honored, too.

The next day, the University of Georgia Bulldogs will travel across the river to take on the home team Clemson Tigers in a matchup that was moved to North Augusta to help celebrate the stadium’s opening.

Then on Thursday, the Augusta GreenJackets open their inaugural season at SRP Park. The GreenJackets will release details of their opening night festivities Monday, and those in the know say it’s going to be a ball, too.

City Administrator Todd Glover, the point man on the stadium and the surrounding development since it was announced in 2012 as Project Jackson, said it feels “surreal” to be finally finished.

“We’ve been talking about it for almost six years, and in four days there’ll be people here and a game played,” he said Thursday night. He stopped by on his way home from volunteering at the Masters Tournament and found the GreenJackets’ crew and executives hard at work.

“They were putting stickers on cupholders on the seats when I left,” he said.

The overall Riverside Village development still has a ways to go, but the centerpiece is done.

“To think that a city like North Augusta was able to pull something like that off makes me very proud,” he said.

Many people, including Pettit and former Mayor Lark Jones, give Glover credit for making Riverside Village happen, certainly for keeping it on track during several setbacks, including a lawsuit that delayed it more than 18 months.

“Without him, it wouldn’t have happened,” he said.

Developer Chris Schoen, of Greenstone Properties, said at the stadium’s groundbreaking 11 months ago: “Todd is really the one who got the vision.”

Glover will take credit for keeping “the political process moving,” but notes that city council members long before his time had their eye on the property as a place to build something special.

“You can trace it back to late ’80s. Mayor (Tom) Greene and council started buying land. Of course, nobody contemplated a baseball stadium then. But if they hadn’t laid the groundwork for this, nothing would have happened,” he said.

The development will include a Crowne Plaza hotel/conference center, first-floor retail with townhomes above, 280 luxury apartments, a senior living facility and an office building.

Restaurants and shops that ring the stadium will have entrances inside and outside, so they can serve people walking by as well as those attending a game. The apartments will have views into the stadium, and there will be a craft brewery next to right field.

It’s designed to appeal to millennials, who prefer to live close to where they work and play, choosing to walk or cycle rather than drive. Linking the Greeneway to Riverside Village and further into downtown has been a hot topic for a couple of years and has the support of North Augusta Forward, among others.

Riverside Village will draw about $150 million in private investment in addition to the city’s $70 million commitment, Pettit said.

In December 2013, about a year after it was announced, Stephen Donohue, who lives in the River Club neighborhood on the South Carolina bank of the Savannah River, sued the city, claiming the development area did not qualify legally as a Tax Increment Financing District. He also said the city council violated the state’s Freedom of Information Act by holding executive sessions without making it clear that council members were discussing Project Jackson.

In June 2015, the state Supreme Court ruled 5-0 that the city council had acted properly in its use of the TIF, which harvests the difference between current home values in the TIF District and those frozen at 1996 levels. Aiken County and the school board agreed that the city could use those incremental revenues to help pay for Project Jackson.

“This transfer of taxes to a corporate developer constitutes crony capitalism at its worst, which will significantly degrade the quality of life of all those who chose to invest their hard-earned money in riverside neighborhoods,” Donahue told The Augusta Chronicle when the ruling came down.

The high court faulted the city, however, for not being specific enough in its motions to close public meetings to discuss the project, and ordered it to pay some of his legal bills. After negotiation, the city paid $14,000 of Donohue’s bills, which he said totaled $40,000. Glover has said the city spent about $250,000 to defend against Donohue’s suit.

Donohue did not respond to messages seeking comment for this story.

In 2016, a group of residents sought to have a Ballpark Village referendum included on the ballot for city elections. City leaders opposed it because all the officials on the ballot were Republicans, and their races would be decided in a primary, not a general election. Therefore, only Republicans would be likely to vote on the referendum, excluding others.

An effort was made to have the Aiken County Republican Party impose the issue on North Augusta, but the state party’s general counsel gave the opinion that the county didn’t have the authority to do that. The county GOP backed off, and the ballot effort died.

After the city council gave final approval to the Master Development Agreement in January 2017, the way was cleared for work to begin.

Even so, city council meetings since have often been forums for opponents to criticize and question city officials’ decisions and the project’s progress.

But Jones, the former mayor, in a letter to the editor published today in The Chronicle, says he thinks many opponents have become proponents as the stadium has risen before their eyes.

“Everything to date points to the success of the project, just as those who favored envisioned,” Jones wrote.

Glover said even the staunchest opponents should take pride in what has been accomplished and what’s to come.

“The end product is worth it. The stadium is an incredible venue. The vision is a great one, great for our city. Not everybody agreed with that, but I really see people coming together now. And once people see it, they’re going to be proud of it. … Most people don’t like to see the sausage being made, but they like to eat the sausage,” Glover said.