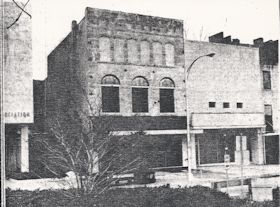 1/27/1983: Augusta Tomorrow board members (Louis Battey, MD, Connolly, O’Keefe and Skinner), representatives of Mayor McIntyre’s office and state Rep. Jack Connell along with Savannah business and political leaders met in Atlanta with the Georgia Department of Transportation Commissioner Tom Moreland to start discussions of a highway connecting Augusta and Savannah.

3/18/1983: The first step toward implementation of the 1982 long-range downtown Master Plan was announced by Bankers First Federal Savings and Loan with the sale and $1 million renovation of 791 and 793 Broad Street, part of the overall plan for the renovation of the entire Bankers First block that included the YMCA building. Augusta Tomorrow board members were the prominent promoters, investors and developers of this project initially called the Bankers First Project. The project was later named Lafayette Center.

4/20-21/1983: Augusta Tomorrow hosted the monthly meeting of the Georgia Department of Transportation in Augusta, the first one held in Augusta in nine years. One of the topics discussed was moving forward on a new Augusta to Savannah Highway.