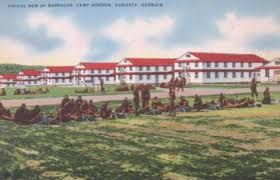 6/30/1941: A resolution adopted by the combined governments of the City of Augusta and Richmond County obligated the governments to operate and maintain the levee.

1950s: The automobile accompanied by an era of cheap energy brought immense change to the downtown. Mobility led to migration to the suburbs. Stores followed the automobile. Daniel Village and Southgate Plaza opened in the west and south suburbs.

1953: The increasing importance of the automobile was illustrated by the Gordon Highway controversy. State and federal authorities decided that a new highway, Gordon Highway, should cross Augusta between 4th and 5th Streets. That was the very oldest part of Augusta, part of Oglethorpe’s original forty lots. After much contention, a vote approving this new highway location was held in October 1955.