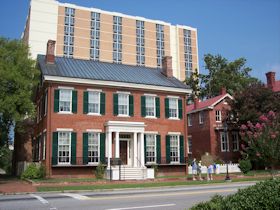 A revitalization effort occurred to try and stem downtown deterioration as more and more residents, retail and revenue moved to the suburbs. Like cities elsewhere, Augusta was feeling the impact of mid-century access to automobiles that made open-spaced suburbs very accessible. In November 1973, seventeen civic leaders including then Mayor Lewis A. Newman agreed to organize revitalization efforts. State Senator Eugene Holley made the first financial pledge for this new Revitalization Plan. A special tax district was created in the revitalization area to generate $1 million from the private sector to be matched with $1 million in Federal revenue-sharing money pledged by local government. The proposed plan and model for the city’s new downtown were unveiled in September 1974. The proposal encompassed 17 acres, and was funded in part by the $2 million. Three goals were outlined for this plan: