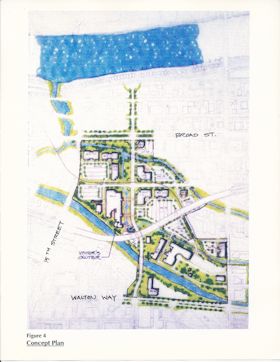 Spring 1994: With most of the originally proposed projects either completed, underway or replaced by other concepts, Augusta Tomorrow, Inc. was determined that additional planning was needed. The impact of the large investment along the riverfront had not been felt in other areas of the downtown, most notably along Broad Street and the central downtown core. LDR International, from Columbia, Maryland, was hired to provide plan updates and further direction for downtown Augusta. The City of Augusta and Augusta Tomorrow, Inc. again entered into a true public/private partnership providing equal funding for this master plan update.

8/9/1994: Augusta Tomorrow, Inc. and the Augusta Canal Authority sponsored a design charrette for an Enterprise Technology Park. The following companies comprised the design team: LDR International, Inc., the joint venture of City Design Collaborative and Lane, Frenchman Associates. This design charrette built out the design concept of an opportunity corridor for research and technology running from 15th Street to 13th Street and Broad Street to Walton Way. At the time, this plan was very conceptual as St. Sebastian Way, an integral component of the design, was not yet built. The charrette concept was expanded upon in the 2009 Urban Area Master Plan.