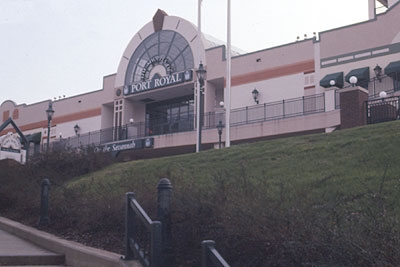 2/1991: Due to the substantial progress and momentum achieved on the riverfront improvements, the City and Augusta Tomorrow, Inc. shifted emphasis to other portions of the Master Plan including implementation of the proposed Penny Bank Neighborhood Commercial Center on Laney Walker Blvd. and various Broad Street projects.

3/14/1991: Port Royal, located at 7th Street on the Augusta Riverwalk, held a grand opening. This $36 million project was financed by French brothers Dr. Edouard J. Servy and Andre Servy and Yves Legros, president of Paris-based CEGEP, Inc., a commercial development company. Port Royal opened as a 14-floor condominium tower with 57 condominium units and a two-level 120,000 square foot mall that housed commercial, office and retail space. A two-level parking deck was also built under the structure. The Port Royal concept (mixed-use development) was provided for in the 1982 Master Plan as part of Riverwalk development. However, Port Royal was not an Augusta Tomorrow, Inc. project. It was a private endeavor totally separate from Augusta Tomorrow, Inc. and Augusta Tomorrow, Inc. was not consulted on any of the project

10/1991: Across the river in North Augusta, a Flood Elevation Determination revision proposed by the Federal Emergency Management Agency (FEMA) to modify the 100-year elevation base for North Augusta took almost all of the South Carolina riverfront property out of the flood plain. The city of North Augusta had requested a revision to the flood plain elevations, and FEMAs revisions opened the way to riverfront development.

12/2/1991: FEMA denied request to revise the 100-year flood plain elevations for Augusta (just across the Savannah River from North Augusta) citing that the City of Augusta needed to pursue such designation with supporting scientific and technical data as a formal request to FEMA.