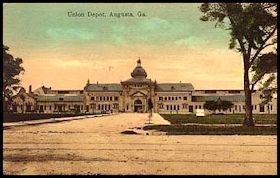 7/18/1968 – A Central Business District Study Committee adopted a $54 million three-stage revitalization plan to transform downtown Augusta into “a city unique to the nation.” This plan proposed developing a new civic auditorium, a river convention center, a monument mall on the 500 block of Broad Street, a cultural center along the levee, waterfront housing and a waterfront park.

By December 1969, the Central Business District Study Committee had only one member, and none of the 1968 plans were implemented.