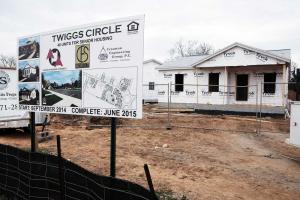 Posted at 13:13h in News, Uncategorized by Augusta Tomorrow

New housing in the Laney-Walker and Beth­lehem historic neighborhoods will be ready for public housing residents this spring, although the area’s transformation has hardly begun.

The Augusta Housing Au­thor­ity is building a small public housing development on Wrightsboro Road for residents ages 55 and older who will be selected off the authority’s waiting list. The project, named Powell Pointe after former historic preservation advocate Addie Powell, is part of the city’s larger effort to revitalize historic black neighborhoods in the urban core.

Construction began Oct. 1 on 16 duplexes and eight two-bedroom, single family homes, said Richard Arfman, the authority’s director of planning and development. The single family homes will be ready in April, and the duplexes in June or July, he said.

At the invitation of the city, the housing authority chose to build in the area to assist in the ongoing neighborhood facelift and provide more senior housing. Arfman said housing for the city’s senior population has been needed since the 2009 demolition of Gilbert Manor, a large public housing project where Georgia Regents University’s College of Dental Medicine now stands.

The housing authority spent $750,000 purchasing 4.5 acres from the Augusta Land Bank Authority, Arf­man said. The land bank, which acquires abandoned properties or those otherwise not contributing to tax rolls, demolished several shotgun-style houses on the parcels.

Construction will cost $4.6 million, or about $100,000 per unit plus expenses for site improvements and roads, Arfman said. The development will have a small park for residents.

Meanwhile, the city’s Housing and Community Develop­ment Department is beginning work on several additional houses to create Twiggs Circle, one of six targeted areas for redevelopment that are part of a master plan for the Laney-Walker and Bethlehem areas.

Across Wrightsboro Road from Powell Pointe, two homes are under construction and additional land has been cleared. Blocks throughout the surrounding area, however, remain scattered with fire-damaged, boarded-up, vacant and ransacked houses.