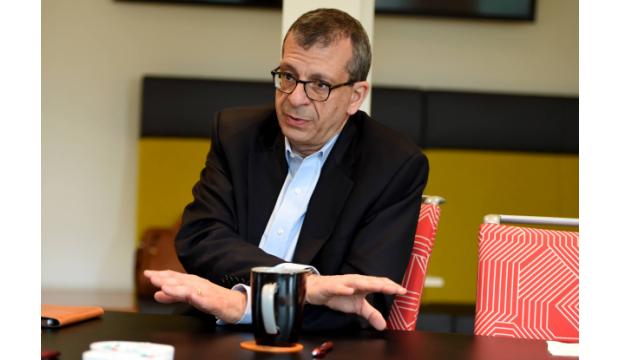 Posted at 11:13h in News, Uncategorized by Augusta Tomorrow

Based on performance metrics, Unisys Corp.’s top-performing service center is its 250-person operation in downtown Augusta. But Unisys CEO Peter Altabef didn’t need to look at a report to know that – he said he could see it in the faces of employees during his first visit to the facility Monday.

“In a prior job, one of the things I would do is walk around the halls and just look at the people,” said Altabef, who served as chief executive of MICROS Systems and Dell Services before joining Unisys in 2015. “It had nothing to do with what they were doing – it was whether they were smiling or not, whether they were friendly, whether they were enthusiastic.”

“We tend to take the long road; we look out a decade or more, and Augusta fits in with that in a lot of different ways,” he said in an exclusive interview with The Augusta Chronicle. “We’re very proud of the facility and the leadership here and where it’s trending.”

The 74,000-square-foot service center at Discovery Plaza provides, among other things, help desk services to the Army and corporate clients ranging from banks to manufacturers. The Blue Bell, Pa.-based Fortune 1000 company provides IT services to companies worldwide.

The IT giant announced in February it was closing a service center in Rochester, N.Y., and relocating about 100 of those positions to Augusta. The company has pledged to Augusta officials that it would employ 700 people here by 2019.

This fall Unisys completed renovating the space’s second-floor to accommodate all 700 workers. The company also has an option on 12,000 additional square-feet of space at the building.

After Altabef’s tour of the facility, which including a “town hall” style meeting with company employees, he had a private meeting with a delegation of local officials and civic leaders, including Augusta Mayor Hardie Davis, Fort Gordon garrison commander Col. Todd Turner, and members of the local chambers of commerce and development authorities.

Unisys announced in 2014 it would locate a state-of-the-art service center in Augusta. A year later it selected space in the 118,000-square-foot space formerly occupied by the National Science Center’s Fort Discovery science exhibition center in the Port Royal Building.

The operation today oversees all North American service centers and manages the operations side of Unisys’ global cybersecurity business. Proximity to Fort Gordon, home of Army Cyber Command, and its workforce played a major role in the decision to develop the Augusta center.

“Not only are they a client, but you also have a great source of people who may eventually end their careers with the military and look for a career out the military,” Altabef said.

Dale Dye, head of Unisys’ Augusta operation, noted Unisys’ program for military spouses, which enables them in most cases to keep their job through telecommuting if their husband or wife is reassigned to another post.

With it’s unique riverfront location, modern architecture and employee creature-comforts – including an employee cafeteria, quiet rooms and breast-feeding stations – Unisys’ Augusta office has been described as its “flagship” service center.

Altabef acknowledged the facility, the newest in the company, is a showpiece for prospective clients.

“Our growth plans over the next two years are pretty aggressive, so we have to go sign the business then we have to bring the business here,” Altabef said. “The facility itself is an advertisement for us to be able to bring in new clients.”