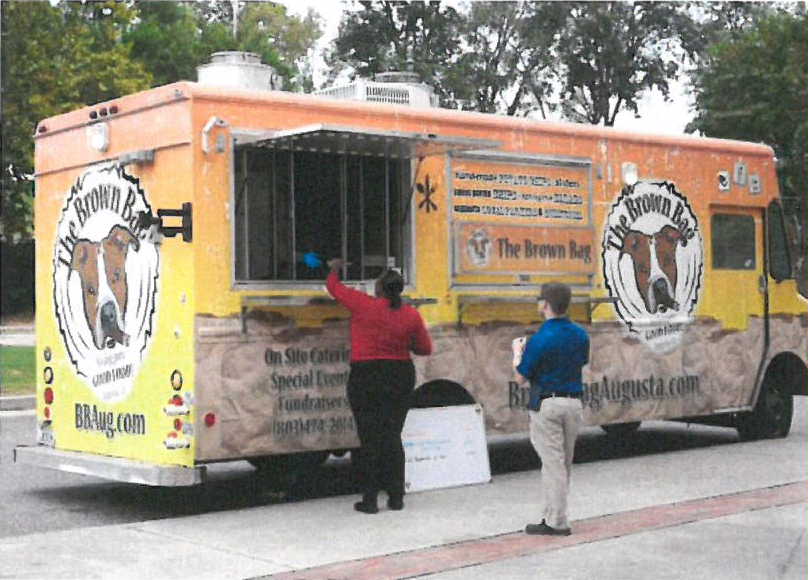 Posted at 13:12h in News, Uncategorized by Augusta Tomorrow

In twos and threes, employees of Unisys came out of their new riverfront office to eat lunch Tuesday, lining up in front of Enrique Romero’s food truck.

“Unisys is new to the area, but they coming from areas where they have big food truck markets,” Romero said.
Romero let Unisys know his Brown Bag food truck would be parked outside. He has been in the food truck business for four years now and he said his hope is that food trucks will catch on thanks to large companies including Unisys.
The approximately 250 Unisys workers haven’t been downtown very long. The company began moving out of its temporary facility on Claussen Road at the beginning of the month, and employees are now performing their Army help desk IT functions from the old Fort Discovery building on Reynolds Street.
Some of the lunch goers walked across a parking lot to eat at nearby Mi Rancho, which highlights downtown restaurateurs’ enthusiasm for having Unisys in the central business district.
“Now we need the rest of Augusta to step up and give them restaurants to go to and coffee shops to buy coffee. That’s part of the fun of getting this open,” said Tom Patterson, the vice president for Global Security Solutions at Unisys.
The Pennsylvania-based information technology and security firm will eventually have 700 employees, maybe more, serving the Army and private companies from its downtown Augusta office.
Employees have been working since the beginning of the year from a temporary office as the company solidified the Port Royal building on Seventh and Reynolds streets as its permanent home and then renovated inside to accommodate the help desk operation.
Once known as the Shoppes of Port Royal in 1991, the former riverfront shopping center became home of the National Science Center’s Fort Discovery in 1997. The museum closed in 2010, and the space sat vacant until Unisys moved in.