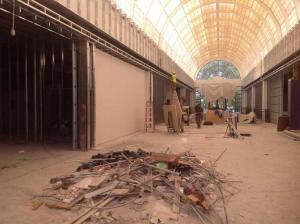 Nearly six months after setting up its Augusta service desk to assist the Army, IT company Unisys has continued to ramp up employment and awaits moving into a larger facility along Augusta’s Riverwalk.

The Pennsylvania-based firm started local operations mid-January with about 60 employees staffing a help desk at a 15,000-square-foot temporary location on Claussen Road. Unisys’ workforce in Augusta has since grown to 220 employees, and the company has added two commercial clients in addition to serving the Army, said Christine Jimenez, Unisys lead service-delivery executive, who is overseeing the Augusta center.

“Our plan is to continue hiring through the end of the year because once we get into Fort Discovery, we’ll be starting to look at supporting some of our commercial clients out of that facility, as well,” Jimenez said. “It will be at a minimum of another probably 30 to 50 people by the end of the year.”

After signing a lease in March to occupy the old Fort Discovery space in the Port Royal building at 1 Seventh St., Unisys has been on the fast track to move into the riverfront space. Jimenez said the target move-in date falls in mid- or late September.

Unisys, which could employ as many as 700 workers by 2019, also remains on track with hiring projections.

The company has expected to employ 250 workers, ranging from entry-level agents to site operations managers and service desk trainers, by the end of 2015.

“We’re really happy,” Jimenez said. “We’ve found some really great, smart, well-educated and motivated folks that are working for us … We’ve had some folks that were agents that have now moved on to be team leaders or onto a level 2 agent.”

To meet the September deadline, construction crews have been working daily since April to retrofit the downtown facility.

Escalators at the back of the building has been removed, conference rooms and offices have been added and mold remediation is ongoing. Despite the changes, the 35-foot “Gravichron” and lobby escalators will remain, said Jimenez.

“They have made significant progress,” she said “There’s walls up and offices are framed out.”

Changes to the building’s facade are visible. While exterior work is temporarily halted pending Augusta Historic Preservation Commission approval, sections of brick and two rear staircases leading to the Riverwalk have been torn down, and a series of new windows are proposed.

About 50,000 square feet of the two-level building will remain for a Richmond County Sheriff’s Office substation and additional office and restaurant tenants.

Jordan Trotter Commercial Partner Dennis Trotter said his firm continues to work with several prospects interested in the space but could not release names. He said restaurants will be located on the first floor to offer views of the Riverwalk and Savannah River.

“We’re spending several million dollars on the lobby, common space and pedestrian areas to really enhance the positioning of the building on the Riverwalk, as well,” Trotter said, “make it more of a gathering place as much of an office building.”

However, Trotter said his immediate focus is construction.

“Keeping (Unisys) on track and making sure they move on time is really the priority right now,” he said.