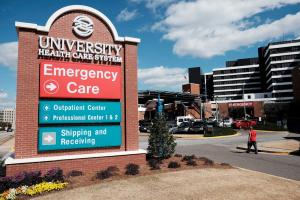 Posted at 15:11h in News, Uncategorized by Augusta Tomorrow

Mary Anne Nolan can see the evidence all around her that University Hospital needs to expand its Emergency Department. She walks past a patient on a stretcher in the hallway sipping a soda while he waits for a room to open up. And in the main waiting room, there are few empty chairs and it is just early afternoon, well before the busy time.

“This is not what you would like to see is this many people sitting in a waiting room,” Nolan said.
University’s board took a big step to remedy that Thursday by voting to approve a $30 million expansion of the Emergency Department. The last major expansion was in 2003 and that Emergency Department was designed to handle 54,000 visits a year; last year, the ED saw 80,000, said Scott Ansede, vice president for professional and support services.
“Clearly, we have some demand for space we need to accommodate,” he said. The new space will expand from 36,000 square feet to 58,000 square feet and will increase the number of treatment rooms from 53 to 78. The rooms will be laid out in a much more efficient pattern in essentially pods, with 12 patient rooms ringing a central area for care providers, which should provide everything needed for care just steps away instead of staff running all over, Ansede said.
“They can spend much more time hands-on with that patient in the room and make the process so much quicker,” he said.
“It’s almost like, instead of having a large ED you have several small ones within it that are pretty self-sufficient,” said Mary Anne Nolan, director of Emergency Services.
The traffic flow is kind of like a racetrack, she said. The outer ring of the pod is the rooms where patients and families will enter and leave and the inner ring with a central nurses station is where the caregivers will travel back and forth to the rooms.
“Right now, there’s all kinds of people walking through the hallways,” Nolan said, as she stood in a hallway dodging stretchers and staff members in scrubs. “It eliminates some of that.”
There will also be a separate pod of six beds for behavioral health patients that should be less bustling than the main pods, Nolan said.
“Fewer noises, fewer people wandering around, trying to provide a more calm environment,” she said.
The renovation and expansion will take place in phases over about three years so that it will not disrupt the access to and operations of the department, Ansede said.
There should be the same number of beds currently available at all times during the construction, Nolan said, and she expects volume to stay about the same or rise slightly during construction. The renovation will result in a much easier and clearer main entrance to the Emergency Department for both ambulances and walk-in patients, Ansede said.

The ED is the point of access for most inpatients, with 73 percent coming through the department, officials said. The parking, which is a little haphazard and on different levels now, will increase from 36 spaces to 57, Ansede said. It will also move some large unsightly equipment in front of the department and take out a gangly metal helipad in front of the entrance in favor of a new landing pad on the ED roof.
“It’s also a beautification project,” joked board chair Levi Hill IV. And while it is a big investment, it is needed for the future, he said.
“Everything we are spending money on really is going to advance our mission,” Hill said.