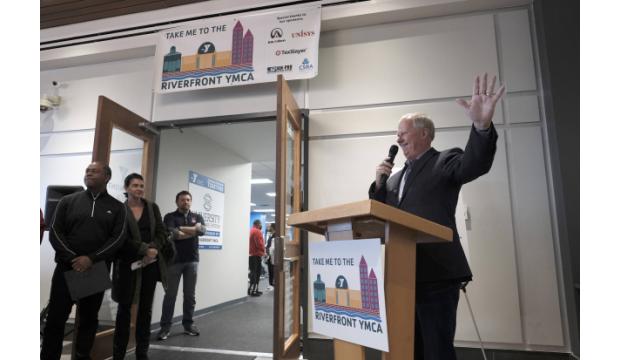 Posted at 13:24h in News by Augusta Tomorrow

Just in time to help Augusta with its New Year’s resolutions, the new Riverfront YMCA is officially open for business.

The Family Y of Greater Augusta announced that it sold its downtown location on Broad Street to TaxSlayer in June. Just a few weeks later it revealed its new location would be in the former Fort Discovery building at Reynolds and Seventh streets.

“Our board of directors made a tough decision,” President and CEO Danny McConnell said at the ribbon cutting on Saturday morning. “We had to decide to sell that location, maintain a presence downtown and to move here. And those were tough decisions. A lot of work and effort was put into it.”

McConnell said a committee looked at 11 different locations before selecting the Fort Discovery building. The new facility shares the space with cybersecurity company Unisys and a substation for the Richmond County Sheriff’s Office.

“I don’t think anyone is more excited about the YMCA, especially in this building, than I am,” Unisys executive director Dale Dye said. “As Unisys continues to try to be the employer of choice in the community, the YMCA and the great partnership we have with them will help that.”

Dye said that while many companies have on-site workout facilities, no one has anything like what the Family Y offers to Unisys employees and encouraged other companies to consider partnering with the nonprofit.

Jeff Asselin, chairman of the Riverfront Family Y board of directors, said the state of the art facility will have the best of both worlds with indoor and outdoor workout areas.

“It’s amazing what moving to the riverfront is going to do for us,” Asselin said. “It’s going to allow us to improve our membership experience.”

Mayor Hardie Davis expressed his excitement about the opening and its contribution to the vision of the city.

“In 2015, we talked about a city where people want to live, learn work and play,” he said. “Today’s ribbon cutting and celebration is all about an opportunity to play together as a team, to incorporate health into that conversation so that we can truly be a healthy Augusta.”

Davis said he and many city employees would be working out in the new location.